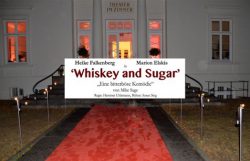 Yesterday was the big night: the prestigious „Theater im Zimmer“ opened their doors for the grand premiere of the play “Whiskey and Sugar“. The premiere was a big success. The audience fell in love with the two main characters played by  Marion Elskis and Heike Falkenberg, and gave thunderous applause.

The director Hartmut Uhlemann also gave a little speech in which he thanked all participants. Theater manager Martha Kunicki who continues the tradition of one of the most respected private theaters in Hamburg of the 20th century, was particularly proud of the successful start of a hopefully long era of delightful entertainment.

The play is playing until October 22 2016, and my exhibition accompanying the piece in the theater goes just as long.